Social Projects of the Orienta Foundation:

Since 2006, the Orienta Foundation has participated in a cooperation programme, first with the Saõ Francisco do Guaporé parish church and, today, with the Cristo Rei parish church, both of which are in the state of Rondonia in Brazil. The project is called “Pastoral da Criança”, and its fundamental aim is to improve the quality of life for children, up to the age of 5, and their mothers.

I’ve been in the municipality of Seringueiras in west Brazil for four years now, a region that still maintains areas of rainforest, and which, for many years, has been used as grazing pastures and farmland for people who have settled here and set up their lives.

Things are not like they used to be, when many families were often overrun with children, and the material poverty of previous years has eased thanks to the work of the region’s people, who are slowly becoming less nomadic. At the end of this year we are celebrating 25 years of the “Pastoral da Criança”, an institution driven by a group of “leaders”, who have been able to reduce malnutrition and the mortality rates of children under 5, something which is almost unheard of in Brazil today.

Since I have been here, the Orienta Foundation has been continually helping us with a weekly donation of 750 euros, which we have invested in the nutritional support of the region’s 150 children. Mothers bring their children to the“Celebration of Life”, in which the children are weighed, they and their mothers are given healthy meals, and training is given, particularly in the areas of health and hygiene and family guidance.

And, of course, they play, jump and bounce around the place, with a particular fondness for the “pula-pula” – the trampoline we were able to buy last year thanks to your help. I should point out that the work I am doing today in Seringueiras, with the help of Orienta, I was already doing several years ago in the town of São Francisco do Guaporé, seventy kilometres from here.

Another new hope here, like in many other places in Brazil, is that of training children to be monitors for Pastoral’s groups. They go in as volunteers, young people of 13 or 14, helping in the tasks of looking after the young ones, weighing them, as well as doing other services, which not all the older “leaders” are able to do; after all not everyone can read and write well.

These people show a great spirit of solidarity, and it is clearly worth our while investing resources in their training. It is not easy mind you. People are already overworked, and finding volunteers is no easy task, especially in times of crisis. And what Brazil is experiencing now, after years of euphoric growth, is being felt everywhere.

The people here, and I too, thank you from the bottom of our hearts. 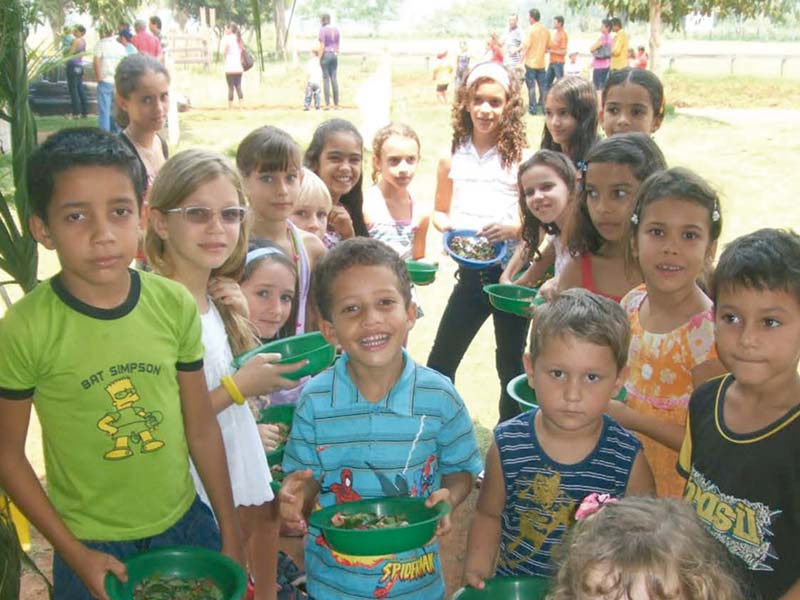 OTHER PROJECTS OF THE FOUNDATION:

WITH THE PROJECT “INFANCIA CON FUTURO”

The Orienta Foundation has been collaborating for several years with the NGO “Infancia con Futuro”. Our small contribution has given many children from third world countries access to healthcare and education.

WITH THE “VICENTE FERRER FOUNDATION”

The Orienta Foundation collaborates with the “Vicente Ferrer Foundation” and, since 2012, our contribution has supported the project “A healthcare network for everyone”, which aims to provide and improve access to quality medical healthcare services for children aged between 0 and 15 in the Bathalapalli Pediatric Hospital.

Many children today subsist on just one meal a day. We know that most days they have no breakfast and often go to bed without any dinner. This is why the Orienta Foundation, in collaboration with the Salesians Social Education Platform in Sant Boi have set up the “Berenars Solidaris” project.